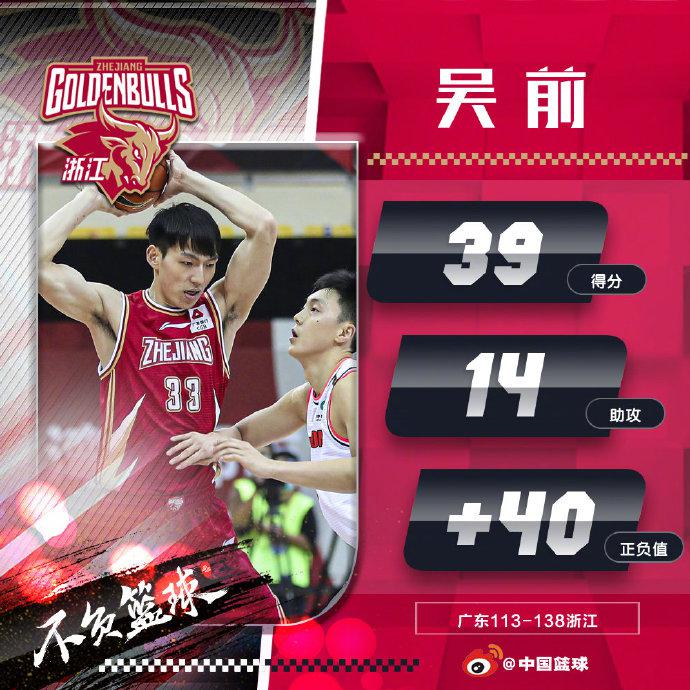 Despite the lack of Yi Jianlian, and despite the stricter restrictions on foreign aid in the new season when facing the all-China team, I am afraid that no one would have thought that the defending champion’s 2020-2021 season opener would encounter such a tragic event. failure.

The first person responsible for the defeat of the defending champion is undoubtedly Wu Qian. In the last game of last season, Wu Qian, who scored 48 points but failed to help Zhejiang Men’s Basketball team continue to advance in the playoffs, seemed to vent all his regrets and melancholy last season to the defending champion. From the first minute of the opening game, Wu Qian showed a more focused and proactive game attitude than everyone else.

It was also under the leadership of Wu Qian that the Zhejiang Men's Basketball team almost ended the suspense of the opener in halftime. Wu Qian, who scored 20 points and 10 assists in the first half, was of course not only willing to end the game early. When the Guangdong men's basketball team in the second half showed some eagerness to counterattack the game, it was Wu Qian who gave the Guangdong men's basketball a head-on.

The Guangdong Men’s Basketball Team, who just wore the championship ring, certainly does not want to be completely disrupted by Wu Qian, but just like the oppressive defense against Wu Qian in the first quarter, it can only be shown by watching him play "2+1". At least in this game, the Guangdong men's basketball team not only did not have any effect on all the restrictions on Wu Qian, but can only bring out the strength and craziness of Wu Qian.

Such a Wu Qian, indeed no one can catch up, and more importantly, after the rematch last season, when the Zhejiang Men's Basketball team without foreign aid also handed over the offensive organization power to him, he , Can also make your teammates better.

This is what makes Wu Qian’s terrible and valuable today. Wu Qian is a player who perfectly combines personal heroism and team supremacy. Such Wu Qian and this Zhejiang men’s basketball team really deserve more applause.